I am One CREATIVE & MODERN

For the uninitiated, a Wide Area Network (WAN) is a network of computers belonging to the same business or other organization that are located in widely different geographic locations, usually sub-grouped into Local Area Networks (LANs). The communications done over the WAN are facilitated by common data carrier companies. WANs have become ubiquitous to most large enterprises, especially when there are many different offices located in different cities, countries, and even different continents. 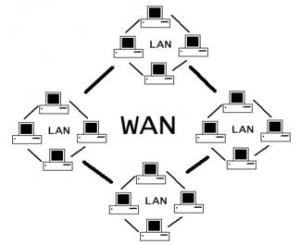 In the beginning days of the Internet, very few Wide Area Networks existed, and the ones that did had to be carefully cobbled together and were manually load-balanced by expert administrators. The Internet was originally developed by military research groups and was only opened up to public and commercial use after the end of the Cold War. Most businesses that had network-connected computers built simple fragile Local Area Networks (LANs), and few of those LANs connect to anything outside each business network through anything more direct than slow, very limited bandwidth telephone systems modems. As more and more WANs grew, the Internet grew alongside them, still barely interconnected. In the twenty years since the World Wide Web was added as a more user-friendly layer on top of the Internet, many innovations have triumphed. One of those innovations is Software-Defined WANs (SD-WANs), the forerunner of Cloud WANs. Cloud networking services dramatically simplify the WAN by delivering virtualized services from the cloud to branch offices and mobile users everywhere. They are the first company to achieve cloud-delivered SD-Wan services.

Still, load balancing and configuration were manually calculated and administered by IT professionals. With the Internet growing and growing for the last 20 years, a huge increase in connections for interoperability have been made between business and organization LANs into massive tunneling WANs. As the number of private WAN connections and diverse routing has exponentially increased, and users increasingly demanded better Quality of Service (QoS)

controls, the complexity of managing configurations and especially maintaining load balancing has surpassed the capabilities of human administrators. Automatic network configuration and traffic management has begun to rely on SD-WANs. The only problem is in defining just what an SD WAN is.

The definition of a Software-Designed WAN is a bit fluid. One person claims a certain list of qualities while the next person claims a very different list. So, no precise definition of the qualities of an SD-WAN currently exists. But, in general, the term means that configuration and load balancing of a WAN are automatically done in real-time by software controls operating on a table of heuristics. The goal is a highly efficient wide-area network with fast throughput, no matter what dynamic challenges occur on it.